Looking at Chess in Art - A Game of Beautiful Problems

A Chess Background Story for Anyone Binging "The Queen's Gambit"
Chess is believed to have developed from an Indian board game called chaturanga, which rose to popularity by the 6th century. Like modern chess, all the pieces (king, minister, elephants, cavalry, chariots, and foot soldiers—the elements of an Indian army) had different powers and winning the game depended on defeating one piece (the opponent’s king). As the game spread into Europe over the following centuries, regional variations led to the creation of new rules and pieces that reflected the social dynamics of the time and place. You can see medieval European society reflected in the pawns, bishops, knights, and castles, who serve to protect the king and queen. Their powers evolved as their real-life counterparts evolved; for example, the queen replaced the “minister” and grew the ability to move any number of spaces in any direction, as opposed to a single space, as queens became more powerful across Europe.
The artist Man Ray, who worked in the 20's and 30's, was a chess aficionado, and in 1920 he designed his first chess set. Consistent with his surreal style that favored abstraction and whimsy over realism and tradition, the set imagines each piece as a geometric shape. The king is a pyramid, the queen is a cone, the bishop is a drinking container called a flagon, the rook (castle) is a cube, the knight is a violin finial, and the pawn is a sphere pictured below: 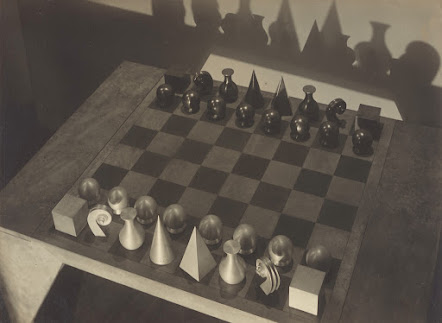 As one of the world’s oldest and most popular games, chess is depicted in paintings, photography, books, movies, and even song lyrics, often as the ultimate intellectual showdown.