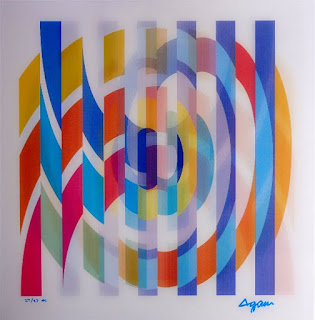 For one Detroit-area couple, it was a trip to a local art gallery and a thrift store that led to an important discovery.

For many years, the local couple had driven by a prominent art gallery, but were a bit too intimidated to go in and explore. Finally, out of curiosity, they decided to wander in, and were pleasantly greeted by a gallerist. They ended up spending several hours exploring the gallery with their guide, and enjoyed looking at art by various old and contemporary masters, many of whom were unfamiliar to them. Among the works of art that most interested them was a colorful, geometric abstract composition known as an 'Agamogragh.'

On another leisurely weekend drive several months later, the husband decided to stop by his local Salvation Army store. As an inveterate thrift store patron, he pulled over and began picking through the racks of used clothing and cases of tchotchkes, but came up empty handed. As he was about to leave the store, he noticed something hanging on the wall which caught his attention. There, in a narrow gold bargain-basement frame was a small, unmatted print, covered with a grimy piece of glass. Although unremarkable looking at first glance, two things stood out:The composition reminded him of the piece he found intriguing during his recent gallery visit; and even better still, it was clearly priced at $7.50! He snatched it up and took it home to show his wife.

When he got home, they examined the print further and found something which appeared to be a registration number on the back. Their curiosity now peaked, they returned to the art gallery that they had visited months before to show the gallerist their thrift store find. Could it be possible that their hidden gem was by the same artist that they saw hanging on the gallery walls several months prior? Upon closer inspection, the gallerist confirmed that the piece was, in fact, an authentic Agamograph, made by Israeli artist, Yaacov Agam, born 1928, best known for his optical art and lenticular prints.  Even better news: their piece is from a sold-out edition now valued at over $8,000.

Thankfully, the couple sought the opinion of an expert, and the authentication process showed Agam’s trademark compositional structure, together with registration numbers which identified the gallery that originally sold it.

When it comes to authenticating fine art, a professional opinion matters. There are many ways to authenticate art, and a statement by an art expert can greatly enhance an artwork’s monetary and scholarship value.


At Your Art Concierge, we help clients navigate the oftentimes opaque art world to find the answers they need. Our multinational expert referrals specializing in art authentication, provenance review, art loss services, and scientific and forensic testing can help provide trustworthy and accurate information to art collectors’ individual and unique questions about their collections.