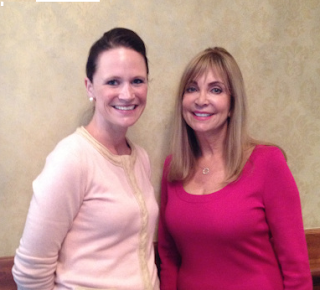 Antiques Roadshow kicked off their 2013 season with a taping in Detroit. A behind the scenes preview at the Townsend Hotel, several days before the show, was hosted by U.S. Trust, Detroit Public Television, and Heritage Auctions.
More than 50 people were treated to a lecture, "The State of Jewelry Today,"  discussing trends, values, and styles. The speaker was Kate Waterhouse (shown left), Director of Jewelry at Heritage Auctions, and Caroline Ashleigh (shown right), Consignment Director of Heritage Auctions, from Birmingham, Michigan.
The best takeaway from the lecture was that jewelry rarely loses its intrinsic value. Ms. Waterhouse showed a strand of natural pearls that went up for auction in 2004 and sold for $21,500. A similar piece sold for $218,000 in 2011.
Each guest received the book, "The Collector's Handbook," by James Halperin, Gregory J. Rohan, and Mark Pendergast of Heritage Auctions.